Bike to Paris in aid of critically ill children

Team Rynkeby – God Morgon (TR-GM) is part of an annual European charity event that raises money for children with cancer, and their families. More than 2000 participants in 54 teams from seven countries took part this year, all of them cycling to Paris along different routes. Axelent sponsors TR-GM Jönköping, one of the 16 Swedish teams, and the black and yellow X can be seen on the cyclists’ right shoulder.

It all began in Denmark in 2001 when Knud Vilstrup at Rynkeby Foods came up with an idea about how he could improve his own health and see the finish line in the world famous Tour de France cycle race. He wanted to get a group of cyclists to bike together from Ringe in Denmark to Paris in France. He thought that Rynkeby Foods could at least sponsor them with some of the juice that the company produces. Knud contacted the management of Rynkeby Foods who agreed to sponsor the team with not only juice, but also DKK 50,000 so that Knud and his biking buddies could get started... on the condition that the team comprised at least ten people. Knud’s idea met with an enthusiastic response and the following year 11 cyclists and one marshal were ready for their 1200 km journey from Ringe to Paris. The name of the team was Team Rynke. 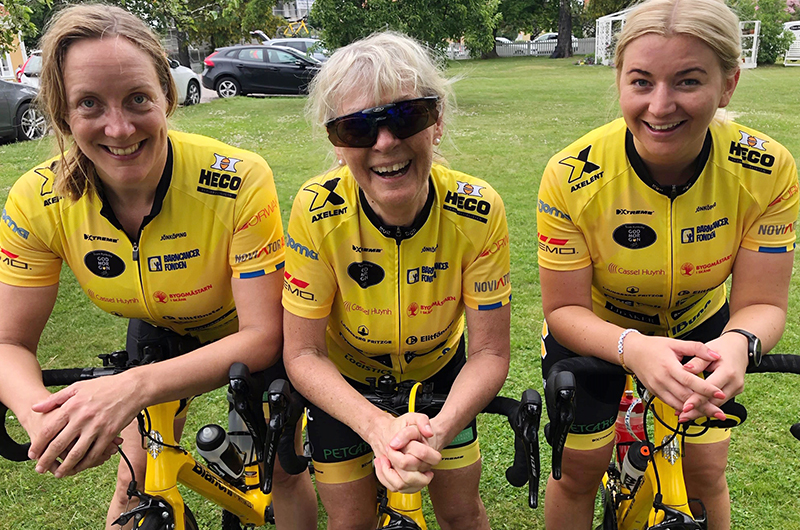 But it wasn’t just Rynkeby Foods that was interested in sponsoring the new venture. Team Rynke was so successful at attracting sponsorship that it had DKK 38,000 in unspent funding when it arrived back in Denmark. It was decided to donate this money to the children’s cancer ward at Odense University Hospital. And that’s how it all started. Although this fantastic project did not start out as a charity drive, Knud and the others realised its potential, and it now raises more and more money every year for those who need it most. For many years, the teams from the various countries all had the same name, Team Rynkeby. The juice manufacturer Rynkeby Foods A/S was sold in 2016 to the German juice company Eckes-Granini. As a result of the reorganisation that took place, it is now Eckes-Granini’s God Morgon brand that ensures that all the money raised by Team Rynkeby in Sweden, Norway and Finland still goes to support seriously ill children. So although the names differ locally, Team Rynkeby is still the generic name for the cycling teams raising money for charity.

On 6th July 2019, all 54 teams arrived at the Champs Élysées, the final stretch of their long journey.
“Everyone will be celebrating with much enthusiasm this evening, but there will also be a touch of melancholy. It has been incredibly intense over the past weeks and when the cyclists wake up tomorrow they won’t need to get into their cycling gear for another day on the road. Many of them will feel a bit of a void,” says Carl Erik Dalbøge, director of the Team Rynkeby Fund.

At the end of September, the Team Rynkeby Fund will publish how much money the teams have raised this year in support of critically ill children in Denmark, Sweden, Norway, Finland, the Faroe Islands, Iceland and Germany. They raised an impressive SEK 100 million last year.